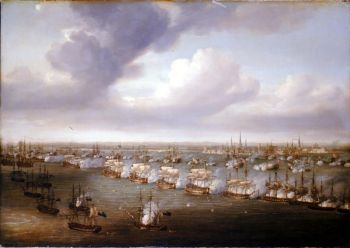 The League of Armed Neutrality comprising Scandinavia, Prussia, and Russia, to enforce free trade with France, was seen by Britain as a threat to the supply of timber and naval stores from Scandinavia.

A fleet was sent which needed to act before the Baltic Sea thawed and released the Russian fleet. Parker was ordered to detach Denmark from the League by 'amicable arrangement or by actual hostilities'. On 30 March they passed through the narrows.

The Danish fleet was moored along the shore with old ships (hulks), no longer fit for service at sea, but still powerfully armed, as a line of floating batteries off the eastern coast of the island of Amager, in front of the city in the King's Channel. The northern end of the line terminated at the Tre Kroner forts armed with 68 guns. Batteries covered the water between the Danish line and the shore, and further out to sea a large shoal, the Middle Ground, constricted the channel. The British spent most of the night of 31 March taking soundings in the channel up to the Danish line.

Parker gave Nelson the shallower draft ships whilst he remained to the north-east screening Nelson from external interference. The British ships anchored by the stern about a cable (240 yards) from the Danes and they exchanged broadsides until a ship ceased firing. Thinking that Nelson might be being fought to a stand-still but unable to retreat without orders Parker signalled to discontinue the action but upon receiving it Nelson made his famous comment "You know, Foley, I only have one eye - I have the right to be blind sometimes," and holding his telescope to his blind eye "I really do not see the signal!".

Eventually the superior gunnery of the British started to silence the Danish ships. The cessation of firing left the way open for the British bomb vessels to approach Copenhagen. Several Danish ships fired on British boats sent out to them after their officers had signalled their surrender and Nelson said that he 'must either send on shore and stop this irregular proceeding, or send in our fire ships and burn them'. He sent a note under a flag of truce to the Dano-Norwegian regent, Crown Prince Frederik. After a further exchange of notes a twenty-four hour ceasefire was agreed.

The Danish-Norwegian loses were estimated between 1,135 to 2,215 captured, killed or wounded. British casualties were 264 killed and 689 wounded. Eleven Danish prizes were burnt and Holsteen returned to England with the wounded. 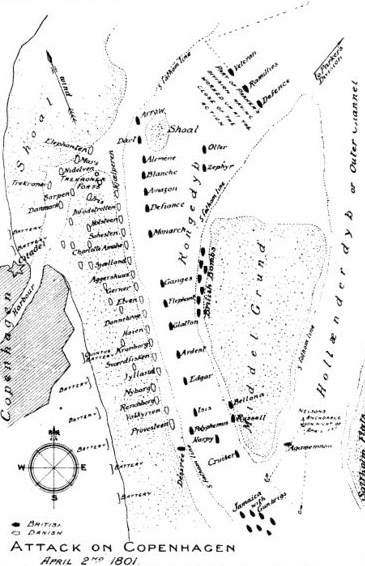