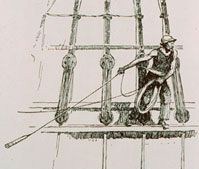 In fiction books a seaman is often tasked with using the lead to check the depth of water.

To do so he is stationed in the chains and then swings the lead backwards and forwards to create momentum. During a forward swing he lets go so that the lead flies ahead of the ship giving it time to sink to the bottom. He then starts to haul in the line until the ship sails over it with the lead still on the sea bottom. As the line becomes vertical he looks down and reads off the depth just above the water.

The line is 25 fathoms long, 20 fathoms of which is marked by different shapes, numbers and colours of material tied at intervals along the line which he must memorise. The materials used were mainly leather, calico and serge. The lead itself was usually around 7lb.

Pilots, fishermen and sailors near their home port were often familiar with the nature of the bottom at a location well known to them. A hollow indentation in the end of the lead permitted "arming" with tallow or another sticky substance so that a sample of the bottom could then be brought up to aid navigation or in unfamiliar locations establish whether it was suitable for anchoring. The nature of the bottom might be mud, sand, shingle or shell for examle or if nothing attached to the tallow, rock.