'City of Adelaide' clipper in danger of being destroyed

'City of Adelaide' clipper in danger of being destroyed 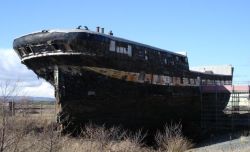 The City of Adelaide was built in 1864. Like the Cutty Sark she is a composite clipper. They are the last two such ships to survive.

The ship sits on a slipway at Irvine in Scotland where it has been rotting away since 1992. Tthe Scottish Maritime Museum, which owns it, has been served with a notice to remove it. With few options available to them, and mounting lease costs, they have applied for demolition which has been approved. The Scottish authorities have lifted the A-listed heritage status that previously protected the clipper. Two groups based in Sunderland, where it was built, and Adelaide, Australia seek to rescue the ship but so far without success. It would be a great shame if one of our historic vessels was lost in this way.