The film John Paul Jones is a 1959 US Film about the American revolutionary War naval hero. By age 17, John Paul, a native of Scotland, is an experienced ship's navigator. In 1773, nine years later, he is master of a ship in the West Indies, but after accidentally killing a mutineer on his ship in order to escape a protracted jail term and trial the governor of Tobago advises him to leave and John Paul adds the surname Jones and goes to visit a brother who lives in Fredericksburg, Virginia. 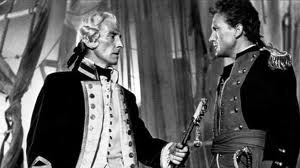 After serving as second-in-command of a battleship in the Bahamas, his adopted countrymen sign the Declaration of Independence. Jones gets his first command, sets sail toward Newfoundland and seizes 18 enemy ships, sending their supplies to American general George Washington.

Washington sends the young officer to France, where he is appreciated for heroic feats at sea. Benjamin Franklin then urges Johns to take a frigate and invade the British Isles. A new vessel is built for him at the suggestion of Marie Antoinette, and the only condition of his majesty King Louis XVI is that Jones' ship, Bonhomme Richard, fly an American flag. He ultimately meets and defeats the British ship Serapis.

Jones' successes ultimately lead him to Russia in 1790 at the behest of the empress, Catherine the Great. He gains acclaim as one of the most brave and daring naval figures of his time.

The film starred Robert Stack as John Paul Jones. It was directed by John Farrow with a screenplay based on the story Nor'wester by Clements Ripley.