An Interview with Julian Stockwin

An Interview with Julian Stockwin

Astrodene's Historic Naval fiction is pleased to have obtained an Interview with Julian Stockwin, author of the 'Kydd' series, ahead of the publication of Victory which will be released on 24 June 2010 in the UK and 1 October 2010 in the US. It is already available for pre-order.

What can you tell us about Kydd's new adventures in 'Victory', without spoiling the plot for readers?

"Commander Thomas Kydd is eager to play his part in thwarting Bonaparte's plans for the invasion of England. He and his ship join Admiral Nelson's command just before the greatest sea encounter of all time: the Battle of Trafalgar. We also see the action from on board Victory herself, through the eyes of Midshipman Bowden This heart-lurching adventure blends fact and fiction in rich and authoritative detail, closely following historical record and taking us into the heart of the world-defining events of 1805 the lead-up to Trafalgar with dramatic chases across the Atlantic, false sightings of the enemy, and convoluted political machinations, including an impeachment of the head of the Navy, the bloody annihilation of the enemy during the actual battle, and the heroic aftermath."

It's hard for me to add to that without giving too much away. The reader will find quite a few surprises in the book ... Kydd will meet Nelson, of course, and some of the other great naval personalities of the time. He'll be witness to the defining naval engagement of the age - but perhaps I should just leave it at that... 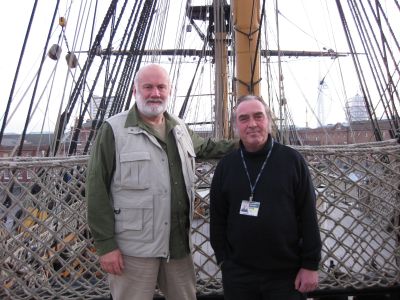 It's well known that you travel widely to research your books. Where did you go for 'Victory'?

The main focus for research for this book was Portsmouth. I was privileged to have been given virtually unlimited access to HMS Victory by the Keeper & Curator Peter Goodwin. As you can probably imagine I spent many hours aboard... Although I know Portsmouth very well, having been quartered in the city during my time in the Navy, and also on location research for earlier Kydd books, I never seem to tire of “Pompey” and its maritime attractions. For 'Victory' I spent quite some time in Old Portsmouth, too, much of which stands just as it did in Kydd's day.

Another centre for research for this book was London, both the physical city and the river Thames, as well as museums, archives and libraries – and I had spent time in the Mediterranean area on previous location research trips.

The Battle of Trafalgar is probably the factual event in naval fiction that readers will know most about and has featured in many other novels. Did this pose any special problems when writing 'Victory'?

Yes, indeed! When I first began the series I knew that at one point I would have to write about Trafalgar, but as I was only in 1793, at book one, I was able to put my concerns about writing about such a famous event to one side, and get on with the business to hand. However, last year, when writing began in earnest for 'Victory' I had to face the special challenges of this book. How could I bring something fresh and new to such a well-known story? In the end I decided to do this by having two perspectives on the battle, one of my hero in his ship, and the other from a lowly midshipman aboard 'Victory' herself.

Another problem was that while I have a huge admiration for Nelson (which, if anything, increased as I was writing the book) he is a huge presence on the maritime stage and I did not want the book to be his story.

'Victory' completes the trilogy that has been building up to the climax of Trafalgar. What direction will the series take next?

Yes, 'Victory' completed the trilogy (which included the previous two titles: 'Treachery' and 'Invasion') that dealt with the incredible events in the two years leading up to Napoleon's defeat at Trafalgar in 1805. 'Victory' is a milestone in the Kydd series; it features the last of the big set-piece naval battles.

Trafalgar removes the sceptre of invasion and Great Britain is now released to seek conquests and colonies in the furthest reaches of the world. Kydd will find himself at the forefront of this race to wrest empire from the French and Dutch, striving for victory in exotic and little-known corners of the world.

Although the series is about Tom Kydd, Nicholas Renzi features strongly. How important do you feel he is to the series?

In Georgian times, while not common, there were people of high status who went to sea as ordinary seamen. This was for any number of reasons, including escaping debtor’s prison, or running away from an amorous entanglement that had gone wrong. Renzi chose to go to sea in expiation of what he saw as a family sin, a fairly highminded reason, but one which does accord with the times.

Initially I introduced Renzi as a foil to Kydd and as someone who could express things a common sailor could not. I have since become quite attached to Nicholas Renzi and he has grown from my original conception of his character. Renzi is not just a Dr Watson to Kydd’s Holmes. They are almost equal in importance in the series, I feel. Actually, Kathy, my wife and literary partner, says I myself am one half Kydd, one half Renzi...

There are now 11 books in the series so far. If you could go back in time, is there anything you’d change?

I guess a writer will always look at his earlier work and see some things that he might alter but in the main I don't think I would make any major changes.

You have said before that the number of books planned for the series has increased. How far into the future have you planned the storyline for Kydd's adventures?

When I first started the series I envisioned eleven books. I drew up a table with the specifics of each title – location, ships, main characters, plot etc. As I was starting out with my hero at the very beginning of his sea career I planned to logically progress him through the rates and on to eventual achievement of the quarterdeck. I must say, however, that eleven books seemed incredibly daunting at that stage.

Last year I realised that it was about time I revised this initial number as I had discovered so much rich material in the historical record as I delved ever deeper into the period in the course of my research. I now see the series as running probably to around 20 consecutive titles and I've sketched out rough outlines for all these. 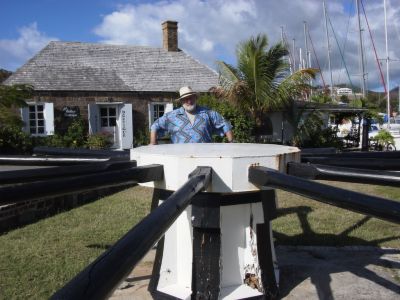 There are a number of authors writing in the genre today. Why do you think naval fiction set in the Age of Sail, and the Kydd series in particular, has been so successful?

The sea has always had a special place in our psyche. Fashions in literature come and go but the sea has a timeless appeal. Speaking for myself I've always been fascinated by sea stories. As a young lad I was very drawn to Forester and later the work of Patrick O’Brian and others.

Naval fiction is not just male wish fulfilment. I have quite a number of female readers and I find their comments very perceptive.

The Kydd series seems to touch a special chord in that as well as being Age of Sail fiction it is in many ways a modern story- that of a man achieving against the odds and achieving greatness.

You recently wrote 'Stockwin's Maritime Miscellany'. Do you have any other writing projects at the moment?

I've a couple of non-fiction ideas that are gestating but nothing concrete yet. Working on the Miscellany was great fun, and I've no shortage of material for something similar, but featuring a different period in history.

A 'complaint' I continue to get is that I don't write fast enough! This is obviously a compliment, but it does take me the full year to complete a new book. However, I do have a monthly email newsletter called The Bosun's Chronicle for those readers who need a Stockwin/Kydd fix in between the yearly appearance of the books. It's easy to sign up via the website. www.JulianStockwin.com

'Victory' is published by Hodder & Stoughton in the UK for release on 24 June and in the US by McBooks Press for release on 1 October. The 'Kydd' series is also published in French, German, Japanese, Russian and Portuguese language editions, as well as unabridged audiobook, ebook and Braille.  The ebook for 'Victory' is out simultaneously with the hardback in June. The paperback of 'Invasion' will be published 27 May in the UK and October in the US.